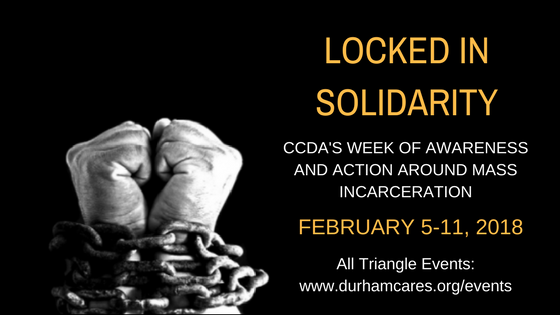 The following organizations are responding to mass incarceration in Durham:

Alerta Migratoria – a local, Durham-based resource for undocumented immigrants seeking asylum in the US.

FADE – a growing group of Durham residents concerned about the interrelated issues of racial profiling, selective enforcement, excessive force, and police harassment in our city.

Forward Justice: a nonpartisan law, policy, and strategy center dedicated to advancing racial, social and economic justice in the U.S. South. Forward Justice’s Formerly Incarcerated, Convicted Peoples and Families Movement was established to elevate the input and expertise of those most affected by the criminal injustice system.

Inside-Outside Alliance – supports prisoners’ struggles on the inside and participates in struggles on the outside against our system of injustice that includes police, prisons, courts and immigration laws — the revolving door of incarceration.

Jubilee Home:  creates a supportive and therapeutic living environment for justice involved young men that enables them to transition back into their community in a fruitful and meaningful way.

Religious Coalition for Nonviolent Durham – a nonprofit organization comprised of individuals who as an expression of their faith and goodwill actively seek an end to the violence that is plaguing Durham neighborhoods.

School for Conversion – works for beloved communities that unlearn habits of social division. They do this by experimenting in a way of life that meets Jesus in the neighbor and the stranger, making surprising friendships possible. Two of their programs that most directly respond to the system of incarceration are Church Beyond the Walls and Project Turn:

SpiritHouse NC – a multigenerational Black women- led cultural organizing tribe with a rich legacy of using art, culture and media to support the empowerment and transformation of communities most impacted by racism, poverty, gender inequity, criminalization and incarceration. Two of their programs that most directly respond to the system of incarceration are the Harm Free Zone and All of Us or None:

Southerners on New Ground (SONG) – a Queer Liberation organization made up of people of color, immigrants, undocumented people, people with disabilities, working class and rural and small town, LGBTQ people in the South. SONG is sponsoring Free From Fear, a forum focusing on bail reform as a means of making Durham’s criminal justice system more equitable.

Straight Talk Support Group – Provides 360-degree support for the family and friends of those currently or formerly incarcerated.

Know of other resources? Email us at [email protected].